Beulah Hosley did indeed land a job as a sewing instructor – for $30 a month! Her date of assignment was June 17, 1912. But she resigned three days later. What happened to Miss Hosley and why am I curious?

It’s because I found her name inside the cover of a sewing manual from 1911. The textbook is a neat little edition, with all her samples carefully worked and attached to the pages. Most versions of this book that I’ve come across are larger with more samples, but it appears that Beulah learned all that was necessary to become a sewing teacher.

She was, if not exactly ahead of her time, at least up with the times. At age 21, her graduation in Domestic Science from the State School of Agriculture in Canton, New York qualified her to teach or to … keep house very nicely!

“The fourth annual commencement exercises of the State School of Agriculture were held at the opera house yesterday afternoon, and proved intensely interesting. The State School of Agriculture and the Domestic Science department are advancing by leaps and bounds, and the entering class is expected to largely exceed any prior one.” – The Ogdensburg Journal, June 12, 1912.

Beulah Hosley learned how to hem, tuck, herring-bone, darn, mend, gather, and do all the other stitches required for handwork. I would guess that she also learned to use a machine and perhaps some basic garment cutting, but I didn’t find any further information on those classes.

But why so short a tenure at her first job? Homesickness? It was far from her home in St. Lawrence County. Or perhaps it was where she was teaching: the Rome State Custodial Asylum in Oneida County New York. The name conjures Dickensian images of miserable people living in wretched conditions. But when I read more about the early years of the home, I realized that  Charles Dickens and Nellie Bly had prejudiced me somewhat. Somewhat.

The institution was founded in 1827 as the Oneida County Poorhouse, and it remained in existence until 1989. As I scanned circa 1910 reports from the Board of Managers, it was evident that much care and effort went into the enormous task of providing for and educating the people who lived there.

They had a dairy, a hennery, a piggery; an orchestra, a baseball team, a choir; a menagerie, fairs, and concerts. Everything was recorded and reported, from the number of cases of tuberculosis to pink eye to syphilis, as well as how many quarts of blackberries and currants were consumed. And of course, sewing classes! Still, to read the reports is to glimpse the struggles, the suffering, and the shame found even in an “enlightened” institution in the early 1900s. 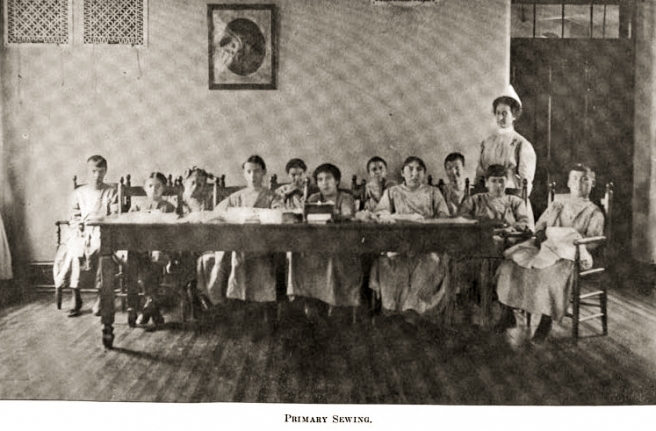 But back to Beulah’s story. I haven’t learned why she didn’t stay there, nor whether she found another teaching job. I do know that she went on to live a comfortable life; she married a couple of years later and had children. Her name appeared in the college alumni publications for many decades after. Did she use her sewing skills at home? Quite possibly. She certainly left a lovely record of the skills she acquired, beautifully preserved for our admiration!