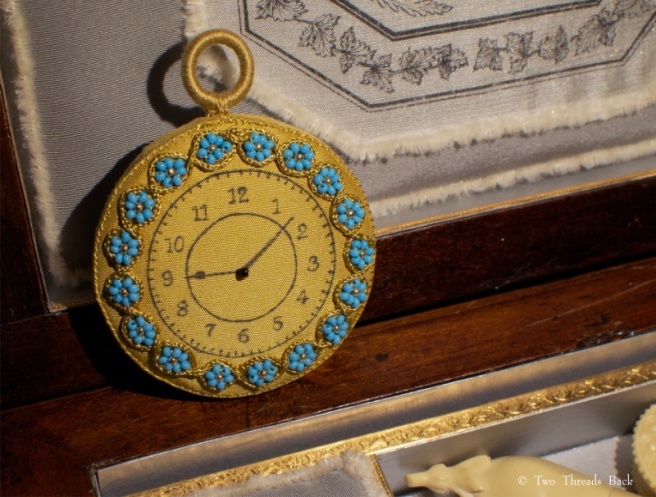 Tiny pin cushions have a special charm, particularly the disk shape, with pins inserted around the perimeter. I always considered it an impractical design though, for sewing. Then one day I came across Mrs. Child’s comment in The Girl’s Own Book (1833) and my dim light bulb clicked on:

What are called “bachelor’s pin-cushions” are made very thin so that gentlemen can carry them in their pockets…. Two round pieces of paste-board are covered with silk, and neatly sewed together, with one or two thin pieces of flannel between them. Of course only one circle of pins can be put in.

Well, of course! They were meant to be portable and keep pins securely tucked away, likely for use in one’s toilette, and not necessarily handy for needlework.

Maybe I fixated on this design because it’s extremely pretty, or maybe because it’s unusual to find that many of the same homemade craft surviving. However, according to a knowledgeable source, this particular one is not uncommon. Even a rare mutation – pink beaded! – has been sighted.

Hmm. Were they made by a single crafty lady? Several crafty sisters? A craft class? Who knows. But I did feel like there was probably a pattern that they all followed; the resemblance was quite striking. So I did what any good researcher does these days and hit Googlebooks.

Aha! It looked like Godey’s Lady’s Book could have been the source. But wait. As you know if you read the history of this sewing machine ad (or maybe you knew it anyway), if it was published once, it was quite likely “borrowed”  by – or from – someone else, too.

Sure enough, it seems that Mrs. Jane Weaver of Peterson’s Magazine provided the same pattern the year before! Yep, word for word. Did Sarah borrow from Jane? Or did they both copy another pattern?

Perhaps they thought a little change would deflect any accusation of plagiarism. With almost everything in print copied by somebody, somewhere, who would even notice? The surviving examples were English – I think – so perhaps the original pattern was also.

Back to Googlebooks for an English source. And indeed, I located another pattern published earlier, in England. The Boys’ and Girls’ Companion featured the watch pin cushion, this time credited to Madame Eugenie, in 1857. And that’s where I met a dead end.

Madame Eugenie? I haven’t been able to locate a needlework author by that name, so maybe it was a pseudonym. There were quite a few frantically creative women trying to survive by publishing needlework books and magazines during those years, so she may remain anonymous.

For now anyway, the pattern for the antique “watches” with numbers and star design remains unidentified. Well then, back to creating my own (economy) version. Since I couldn’t find materials exactly like the originals, I had to do some contriving.

As per usual, the whole project turned out to be an excruciating exercise in “making things up as you go along.” What I learned:

It was actually a lot of fun doing everything but the pen work since I’m not good with handwriting, and I couldn’t “ask an older brother or a papa.” Even unpicking beads (when they didn’t fit because I didn’t draw a pattern FIRST) was rather enjoyable; hearing the tiny taps when they fell off and hit the tray was ridiculously entertaining.

And just about the time I was finishing the little ring on the top, I chanced upon an even earlier pattern – and I wasn’t even looking for it!

Sadly, there were no pictures. And it was for the needle-book/pin cushion version. But it gives me hope that another pattern is out there, just waiting to be discovered. I’ll keep a watch.