And in this corner we have the challenger: an 18th century pattern of a floral sprig from the Lady’s Magazine, 1776!

When I read about the Great Lady’s Magazine Stitch Off a few weeks ago, I knew it was something I wanted to do. Firstly, because I love early women’s magazines; secondly, because of the Jane Austen connection; and finally, because I could suit my project to my skill level – dabbler seems fitting.

A two-inch flower on a plain muslin pocket handkerchief, worked in a simple chainstitch with some wonderful Au Ver à Soie, would be just right. And perhaps some historical touches to set the mood.

I had visions of myself sitting at my worktable to pounce the pattern, then deftly working the little sprig with an elderly tambour hook. That might occupy me for an hour or two, then I’d pop it in the mail to the Chawton House Library “Emma at 200” exhibit. How hard could it be? 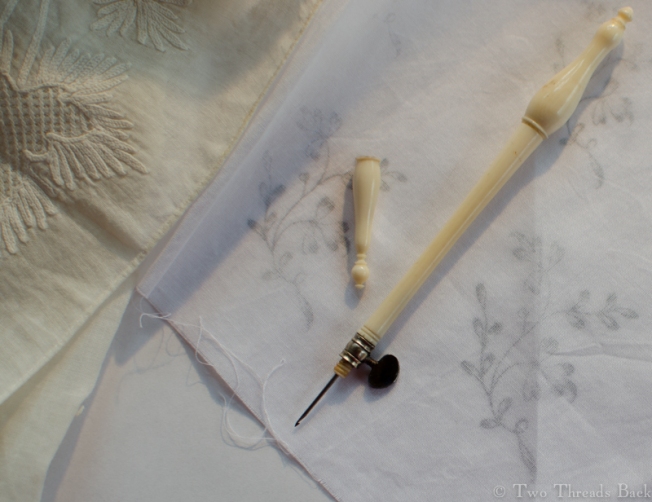 Here’s my fantasy, what I wanted to happen. Note the 18th century embroidery I was looking at for inspiration – carefully folded so the damaged areas don’t spoil the effect.

Well, Fantasy was introduced to Reality fairly soon. I realized that the pouncing powder I’ve had (unopened) for 20 years required a little more research and practice to use than I wanted for such a small project. What’s so bad about using a disappearing marking pen after all?

Here’s the reality, modern day all the way. Notice anything glaringly wrong here?

So next came the tambour hook I’d been dying to try. It seems there’s more to using one than just picking it up and poking it in and out. Not to mention that the ancient point had a tendency to shred a few threads along the way. What’s wrong with using a needle?

Ok, I started with the needle and made it about halfway before I thought: ick! No two chainstitches were alike. I picked it out and decided to try a sort of running/darning stitch, also common on period pieces. Bleh. It looked worse than the first attempt, so I picked all that out and decided it would have to be chainstitch after all.

Well, I did better on the third try. But when I was almost done, I felt something didn’t look right. Maybe you spotted it already? I had put the muslin back in the hoop underside up. And there it would remain. Six hours into this two-inch project, I was not doing it over.

The hemming went better than the embroidery. I didn’t really mind that one side had a wider hem than the other three. But the flower centers looked a little plain. I thought I’d try some microscopic drawn thread work. Isn’t it amazing how fearless ignorance can be?

Another six hours later I was done. Then I remembered my calling. Plain needlework! I could not send this handkerchief out into the world without marking it. A silk monogram was beyond my ability, and turkey red thread would be out of place on this mouchoir de poche. So I used blue cotton (I’ve seen real examples) and started on my initials in the opposite corner. 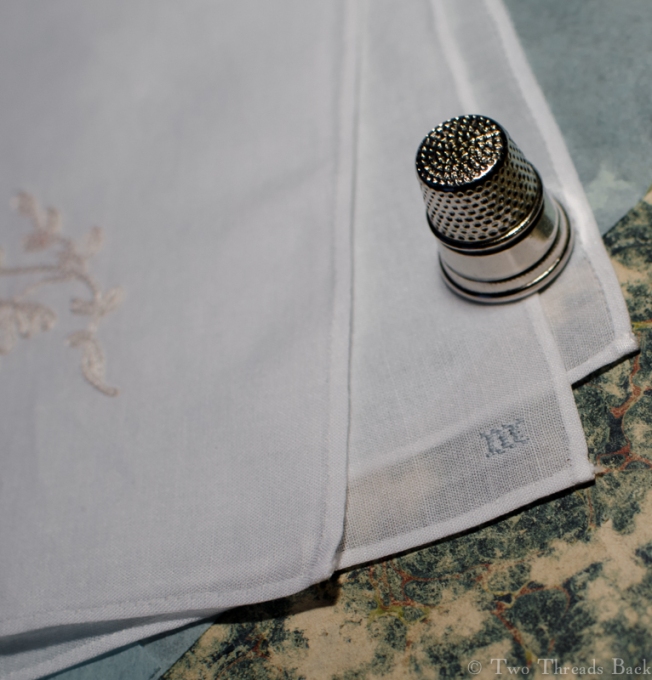 A mono-(in the most literal sense)-gram letter “M” worked in cotton from a period pattern. Most early marking charts I’ve seen had letters seven X’s tall.

It hurt. Not just squinting to see the threads, but to realize I’d placed the “M” too close to the corner to add my other initial. It kind of looks like I meant it to be that way, so I won’t tell anyone.
P.S. Check out the Stitch Off Facebook page too, you’ll see some gorgeous examples of embroidery by people who really know how. In color, no less! Maybe you’ll be inspired to participate?

There once was a lady who lived and sewed in New England, way back around 1810. She had a little girl who wanted to help, and so she taught her how.

This lady (I’ll call her Mary because there’s a 27.4% chance that was her real name) was making a simple quilt out of four patch squares. Calico was dear, so she used every teensy scrap she had to make the patches.

This is a view of the back showing Mary’s careful piecing. The narrowest blue striped bit measures 3/8″ inch, not including the seam allowance.

She gave Betsy (I’ll call Mary’s daughter Elizabeth because there’s a 14.3% chance that was her real name) some squares to practice on. Betsy wanted the pretty patterns to work with, but Mary was reluctant to use those for lessons, so she compromised. One print, one plain. 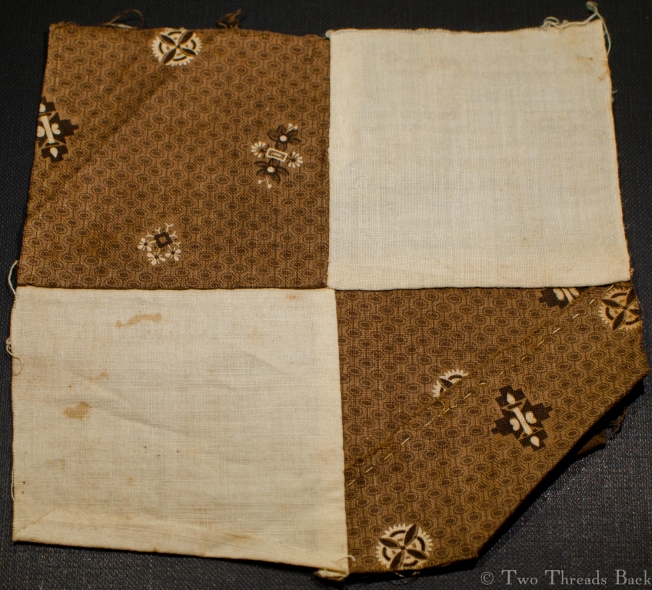 Betsy’s finished square. Do you notice something a little odd here?

Well, Betsy finished her block, and Mary finished 89 others. Then she packed them all away. They were never made up, but remained in a box in the attic for 200 years. Don’t you wonder why? 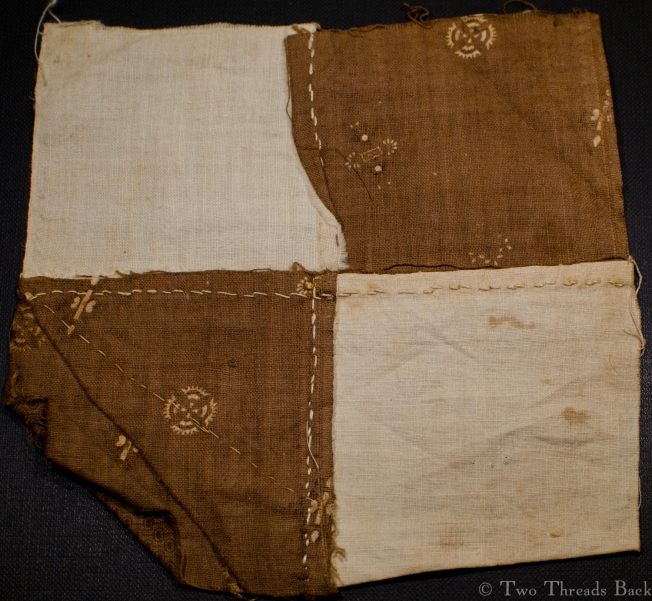 Betsy’s work from the back. Yes, her stitches are a little clumsier than Mary’s, but she was learning. And they’re straighter than mine – go Betsy!

It’s time to jump forward a hundred years from the subject of my last post. Here’s a peek at a pleasing, albeit staged, scene of domestic happiness. I love these old stereoviews because the photographers often took such pains with the props, trying to tell a story. And if the subject is sewing or 19th century domestic life, that makes me very happy!

The photo on the right side, because sometimes they’re slightly different.

In this picture, it looks like Mama is mending Papa’s pants. Her daughter seems barely old enough to hold a needle, but is earnestly attempting to help. Is Mama wearing an apron over her silk dress? It certainly looks like she’s sporting a fashionable chignon. (That late ’60s, early ’70s hairstyle was sometime over-the-top and subject to ridicule.)

She may be seated in a woven cane chair, and she definitely has a sewing basket beside her on the table. It looks like the kind with small pockets fixed to the sides. The little girl’s checked dress may be an apron or pinafore, though I can’t quite tell.

Shifting from shifts to chemises.

Language is a funny thing. I suppose we’re all guilty of following fads in our choice of words, and we all have particular phrases we find irritating or amusing – in other people.  I recently came across an example by Jane Austen, written in 1817, just as the polite name of a woman’s undergarment was changing.

‘Your Anne is dreadful – . But nothing offends me so much as the absurdity of not being able to pronounce the word Shift. I could forgive her any follies in English, rather than the Mock Modesty of that french word…’

So presumably Miss Austen was still wearing shifts, when other ladies were beginning to wear chemises. She wasn’t alone, however, in her annoyance with linguistic affectations. Pantalogia, a New Cabinet Cyclopaedia, Comprehending a Complete Series of Human Genius, Learning, and Industry, Alphabetically Arranged; with a General Dictionary of Arts, Sciences, and Words (1819) has this to say:

CHEMISE, the French word for that article of linen under dress which when worn by men is called a shirt, by women a shift. Some few modern English ladies, with an affected squeamishness of delicacy, restrict the term always so as to denote the article of female dress chemise de femme; but as every one knows what they mean by the expression, and we see no reason why every one should not know what they mean, we recommend the use of the old English term, and the abandonment of the corresponding French word.

Was there really any difference between a shift and a chemise? Well, yes and no. No, because they both referred to the same lady’s undergarment. Yes, because when the word “shift” was used (up until the early 19th century), the garment was usually made of linen and was simpler in cut.  As the word “chemise” became standard, variations in pattern and trimming were increasing and the chemise was more often made of cotton.

So much for the term; now was there any significant difference in the French and English methods of making this garment? I haven’t found anything consistently, unmistakably,  irrefutably, definitively identifiable. When I examine an old chemise, whether in a book, online, or in person, I can’t raise an eyebrow knowingly and say, Ah yes, English, 1832.

But with the interest and expertise I see popping up in blogs and books, I wouldn’t be surprised if someone has – or will – come up with a list of distinguishing features.

If you are curious (or courageous) and would like to compare for yourself, below is a pattern and description, 1840, from a French periodical. (Please excuse my awkward translation. If you are fluent in French and English, I beg you to let me know and help me correct it!) English patterns and instructions of the same date are available in the Workwoman’s Guide.

No. 8 is a woman’s chemise. For ten chemises, purchase 25 meters of percale; take off a meter, and cut the rest into ten pieces; fold these pieces into two; on side No. 1, cut the gore that you add to the other side, cut by a thread as shown in No. 2; inside cut two gussets; indent around the neck; this is shown in No. 3; the sleeves are cut on the bias. Gather slightly on top of the arm and hem the bottom with backstitching. The armholes have to be a little curved under the arm. Take the remaining meter, measure a narrow band along the edge, then cut twenty pieces for double shoulder straps; these pieces are indicated by dotted lines; place a narrow piece of tape between the shoulder strap and its lining, there you insert the sleeve and backstitch, and you fold the lining over; gather the top of the chemise, as indicated, and insert a narrow tape of a meter in length; then cover this piece of tape with a band of percale; using backstitching and hemming, then fold under. Mark the chemise over the left gusset.